St Martin of the Tours – Saundby 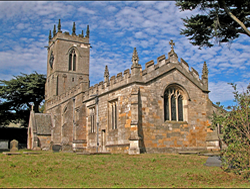 There was probably a Norman Church where the present building stands, although nothing remains of it except the font which is now standing on a modern base. On the outside of the tower is an inscription in Latin, which translated, says: “In the year of Our Lord, 1507 (or 1512, this is not clear) this tower was built” There are some pieces of 15th Century glass in the tower window. The mutilated effigy of the Knight in armour outside the chancel screen is that of the founder, one of the de Saundebys. The inscription on the tombstone in the chancel stone, translated, runs: “Here lies William Saundeby, Lord of the Manor of Saundeby, and Elizabeth his wife, who died May 12th AD 1418. The builders of this Church. May God have mercy on their souls, Amen.” The manor of Saundeby passed into the hands of the Helwys, and in 1599 the tomb and monument on the north side of the chancel was erected. The touching inscription translated is as follows: “Here lieth buried the body of John Helwys, Esq., some time Lorde of this Manor, and Mary his wife, the daughter of Robert Blagden, of Thames Ditton in the county of Surrey, Esq., who left behind them two children, Gervase and Margaret, 7th December AD 1599.

This is a work of piety, not of pride, and the work of deep affection, for in their own lifetime they taught me how I ought to honour them indeed. Thus it behoves me to live, and them to die.” The ancient stone altar(since removed) in two pieces is embedded in the Jacobean table, and when the Church was restored by the liberality of the Rev. C Hudson, a former Rector, a reredos of gold and enamel mosaic in an alabaster frame, was erected, and the chancel paved with black and white marble slabs. The walls on either side of the altar are lined with alabaster and panels of red Verona marbles. The chancel screen is of English oak taken from one tree grown in Norfolk. There are three bells, two of them having inscriptions, “Jesus be our speed,” and “God save the Church.” The roof in English oak is divided into four bays and panelled. The carved principals, cornices, and other timbers are richly moulded. The choir stalls and all the seating in the Church were of good oak, but again, these have since been removed. The Jacobean pulpit was happily saved from destruction although it is plain in appearance. All of the glass in the windows, except the East one, are by Kempe and are some of his best work.

The Church possesses a chalice and cover made in the year 1570 by a London silversmith, and a first edition of the 1611 Bible, the latter being placed in a glass case in the South aisle. The Lectern (which is now in Bole Church) was presented in memory of Driver William Arthur Chambers, Army Service Corps, by his family. He died in France on the 8th November 1918, three days before the end of the First World War. There are records of the Rectors of Saundby, from the time of George Hewitt 1662 to the present Rector, the Rev D T Glassford. It is a beautiful little Church and well worth a visit. The glorious cedar tree at the south-east of the building show in the photograph, and one of the most perfectly grown trees in the county, should also be noted. Saundby Church has been closed since 1973. It is still however a consecrated building and is looked after by the Church Conservation Trust. On 6th September 1998 the church reopened for one day and through kind permission of both The Bishop of Southwell and the Churches Conservation Trust the Reverend Michael W Briggs held a special Harvest Thanksgiving Service for a congregation of about ninety people. It is also visited by Americans as there is a link with the Pilgrim Fathers and cyclists from around Nottingham include the church in their yearly cycle ride around Nottinghamshire Churches.  The cycle ride around Nottinghamshire Churches used to be an annual event and as such the church was open to the public on this day (usually a date in September).  It is not clear, since COVID 19, if this is to be resumed.

Saint Martin was an army officer in France, and one day, during a very severe winter, he was riding at the head of a unit of soldiers through the gate of Amiens when he saw a beggar, with hardly any clothing and shuddering with cold. Saint Martin drew his sword, cut his cloak in half, and gave half of it to the beggar. After he had gone to bed that night, the figure of Christ, surrounded by his Angels, and wearing the half of the cloak that Saint Martin had cut off, appeared to him; and he was commended for his charitable and unselfish act.

This story is depicted in two of the windows in the South wall.